This shell script can help you schedule RMAN full backup from the Crontab:
https://www.dropbox.com/home?preview=schedule_rman_full_bkp.sh

In case you are interested in an interactive script to run it manually then use this script:
https://dba-tips.blogspot.com/2017/03/rman-backup-script.html

For the first script before you schedule it to run in the crontab you have to do the following:

Modify the following mandatory parameters at the top of the script to match your database environment details you want to back up:

If you still have time you can modify the optional parameters:

This script is part of the DBA BUNDLE, to read more about it please visit this link:
http://dba-tips.blogspot.ae/2014/02/oracle-database-administration-scripts.html

DISCLAIMER: THIS SCRIPT IS DISTRIBUTED IN THE HOPE THAT IT WILL BE USEFUL, BUT WITHOUT ANY WARRANTY. IT IS PROVIDED "AS IS".

Introduction:
Oracle Resource Manager (available since 8i) is one of the underestimated Oracle features, because it's not commonly used among DBAs.
In this article I'll try to explain it in a simple way to make you change your mind and start making use of it.
What is Resource Manager:
In short, it gives the DBA the power of controlling system resources i.e. (CPU) by specifying who has the proirity of using system resources at the time of resource starvation. This means if you don't have CPU bottle necks throughout the day, you don't need it!

- You want to control the resource consumed by users using tools like SQL Developer/TOAD. (i.e. limit the CPU consumption/ Cancel the query/ Kill the session/ Limit the used degree of parallelism).
- In case there is a resource contention occur at night and you have a very important ETL that should complete on time, and you want Oracle to give this job the highest priority.
- There is an important DB service being used by finance applications at the end of the month, and you don't want other departments connecting via different services to compete the CPU resource with that finance service.
- You want the night RMAN full backup job to release the CPU resource for production applications in case a CPU contention happen at night.

Now it's time to setup a Plan and its Consumer Groups and Map these consumer Groups to Consumers. Before getting confused with these terms, let me first start with an example simplifies them to you:

Congrats! if you understood the above example you understood the Resource Manager components;
Resource Plan specifies how much CPU will be shared with consumer groups, who will be assigned to these consumer groups, and the distribution of the rest of unused CPU if available.
Consumer Group defines how much CPU resource will be used by specific consumers.
Consumers are the ones who will utilize the resources allocated to the consumer group.
Plan Directive defines the criteria by which the Consumers will get assigned to Consumer Groups.
Next, let's move to the creation of the Resource Manager components ...
- First, create something called Pending Area, it's kind of a temporary area Oracle  use to track/validate the changes to the resource manager to maintain the integrity of the Resource Manager configurations and avoid any miss up could happen. This Pending Area will be associated with your session only, at the end of setting up the Resource Manager you have to close/finish this Pending Area in order to validate and submit the changes. It's similar of BEGIN & END in PL/SQL but this one is specific to Resource Manager.
EXEC  DBMS_RESOURCE_MANAGER.clear_pending_area();
EXEC  DBMS_RESOURCE_MANAGER.create_pending_area();

Create Plan Directive:
Plan Directive defines the resource limits for each Consumer group: [Here is the core idea of the Resource Manager, if you understand it, you understand the whole topic]
Note: MGMT_Px represent the CPU level, MGMT_P1 is the capacity of 100% of all CPUs (cores), whatever will remain unused (leftover) from MGMT_P1 it can be utilized by MGMT_P2 (level2), and whatever leftover from level2 can be used by MGMT_P3 and so on up to 8 levels. Which means if MGMT_P1 is utilizing 100% no CPU will remain left for MGMT_P2.
Ideally, all apps/services should have a share in level 1 (MGMT_P1) each share represent % of total CPU, all shares combined should not exceed 100%, This share doesn't restrict the App/service of using 100% of the CPU if CPU is not utilized by other services (as long as the active running sessions is less than the number of CPUs), but it will maintain that at anytime the Apps/services will get their defined % share in case there are other sessions competing for CPU resources (CPU is busy).
OK, if all applications will be under level 1 then each application will have a defined share in the CPU, but what is the difference between the plan directive levels (MGMT_P1, MGMT_P2, ...)?
The difference between plan directive levels is similar to the lion family, when they are not hungry, and meat is available, anyone of the lion family can eat peacfully from the meat (no CPU contention), but when they all become hungry and meat is not enough for all (CPU contention), here the rule will apply (Plan Directive), the lion will eat first till it get stomach full, then the lionesses and last the lion kids. 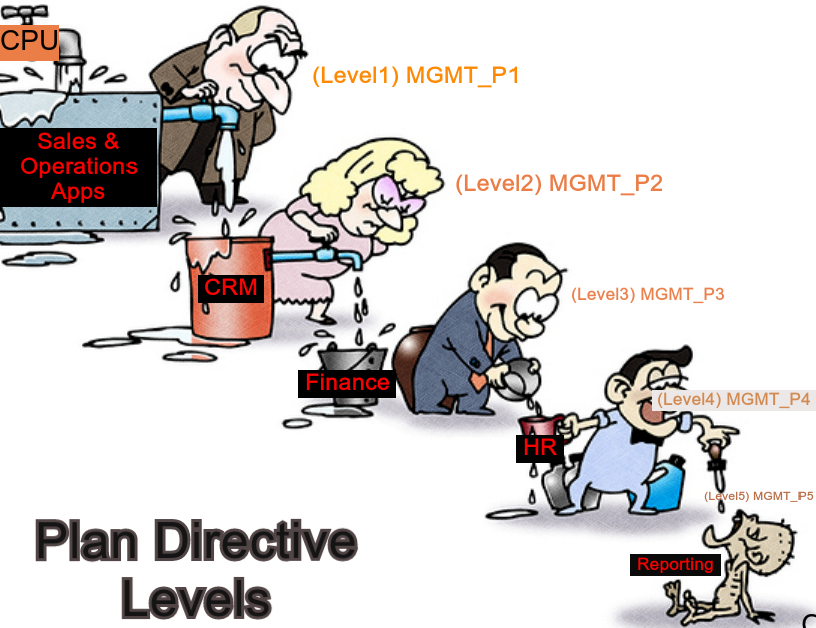 Note: There is a consumer group exist by default called "OTHER_GROUPS", it MUST be part of any defined plan directive.

Note: To drop a consumer group you must start with dropping the lowest MGMT_Px consumer group.
Note: Plan directive can be modified (dropped/recreated) on the fly and it will reflect immediately on the current connected sessions once the pending area get submitted.

To prevent a resource plan from being changed during such maintenance windows use FORCE keyword:
SQL> ALTER SYSTEM SET RESOURCE_MANAGER_PLAN = 'FORCE:prod_plan' SCOPE=BOTH SID='*';

Implementation is complete, you can tailor the above steps to cater to your business needs.
Monitoring The Resource Manager:
View which Resource Plan is currently Active: [CPU should be ON]
SQL> select name, cpu_managed from v$rsrc_plan where is_top_plan = 'TRUE';

View a Consumer Plan and its consumer Groups:
SQL> select group_or_subplan from dba_rsrc_plan_directives where plan = 'prod_plan';

Note: The existance of wait event "resmgr:cpu quantum" represent the CPU throttling that caused by the Resource Manager when DB has a workload exceeds the CPU capacity.

The July release of DBA Bundle is now available:
https://www.dropbox.com/s/k96rl0f4g39ukih/DBA_BUNDLE5.tar?dl=0

The new features include:

- Adding Execution Plan History and enhancing the output formatting for sql_id_details.sh script for showing the details/execution plan/history of a SQL statement.
- Enhanced locating listener's log and bdump logs in oracle_cleanup.sh for cleaning DB logs.
- Enhanced the check of backup location validity in RMAN_full.sh script for taking on-demand DB backup.
- Adding multipath setting to the configuration baseline log in configuration_baseline.sh script which save the details of DBs and server configurations.
- Enhanced the 12c compatibility of dbdailychk.sh which creates health check report for the database.
- Exclude golden gate processes from the long-running queries reporting in
dbdailychk.sh and active_sessions.sh scripts.
- Added the options of modifying the backup tag, overwrite the last backup in schedule_rman_full_bkp.sh which can be configured to perform a regular database full backup.
- Minor functionality enhancements and bug fixes in the following scripts:
export_data.sh   For exporting data.
rebuild_table.sh For rebuilding tables online.
oradebug.sh       For gathering an oradebug report.

For more reading on how to use the DBA Bundle:
http://dba-tips.blogspot.com/2014/02/oracle-database-administration-scripts.html
Posted by Mahmmoud ADEL 1 comment:

Oracle 19c is packed up with lots of cool features, I've summarized the significant ones in below categories.

- SQL plan management automatically evolve the plans and accept the best ones.

- Caching Big tables:
Specify how much % of the db_buffer_cache will be allocated for caching big tables: [40%]
SQL> alter system set db_big_table_cache_percent_target = 40;

Note: Oracle will automatically cache any big table in the memory if its temperature goes off 1000.

Auto Index Creation:
Indexes will be intially create as INVISIBLE indexes if the analysis show performance improvement on candidate SQL statements it will be converted to VISIABLE and will be used by the application, if not, the created indexes will be marked as UNSUABLE and will be dropped later and the candidate SQL statements will be blacklisted to not use use Auto Indexes in the future.

Enable Auto Indexing but Allow only the creation of INVISIBLE auto indexes, so it will NOT be used by the Application:
SQL> EXEC DBMS_AUTO_INDEX.CONFIGURE('AUTO_INDEX_MODE','REPORT ONLY');

Control the Auto Deletion RETENTION of the UNUSED indexes created manually: [Default is never to be deleted]
[Strongly recommended to NOT set this parameter]
SQL> EXEC DBMS_AUTO_INDEX.CONFIGURE('AUTO_INDEX_RETENTION_FOR_MANUAL', '90');
To Reset it back to Never Delete Manually created indexes:
SQL> EXEC DBMS_AUTO_INDEX.CONFIGURE('AUTO_INDEX_RETENTION_FOR_MANUAL', NULL);

Specify the Default Tablespace to store Auto indexes: [e.g. IDX_TBS tablespace | The default is to store them on the DEFAULT TABLESPACE for the database]
SQL> EXEC DBMS_AUTO_INDEX.CONFIGURE('AUTO_INDEX_DEFAULT_TABLESPACE', 'IDX_TBS');

Just to remind you with the non-blocking DDL statements that were added in the previous releases:

- Schema-only accounts can have no passwords to now allow login:
SQL> CREATE USER TEST NO AUTHENTICATION;

- Privilege analysis is now available as part of Oracle Database Enterprise Edition to show exactly what privileges are used or not used by each account.
You will create a policy and enable it for some time to do the analysis, then you disable the police.

- The restore points created on Primary are automatically propagated to the Standby.

- Easy connect Plus can initiate connection with simple command:
sales-server//inst1

- Duplicate standby DB from active primary database using Compression:
In 19c you can duplicate a standby database from an active primary DB using COMPRESSION feature which can send the database block via the network in a compressed format saving the bandwidth and the time as well.

- Automatic flashback of the standby:
When a FLASHBACK operation happen on the primary DB the Standby DB will be automatically flashed back.

- DML Operations on Active Data Guard: [insignificant feature! but thought to mention it]

If enabled, DML transactions can happen on the Standby DB, first DMls will not apply directly on the standby but will be first shipped to the Primary and applied on the Primary then changes will be replicated on the Standby then the DML will be completed (long path and can slow down the primary).

- Sync the gap between the primary and the standby using one RMAN command: [From Standby side]
RMAN> recover standby database from service orclpr;

Note: orclpr is the service which connects to the Primary DB from the standby.

- DBA_REGISTRY_BACKPORTS view introduced to show the bugs that have been fixed by the patches applied to the database.
- Oracle Multimedia is desupported. Oracle recommends to store multimedia content in SecureFiles LOBs, and use third party products for image processing and conversion.
- Oracle Streams feature is desupported. Oracle recommends to use Oracle GoldenGate product to replace all replication features of Oracle Streams.
- DBMS_JOB Jobs Converted to DBMS_SCHEDULER Jobs in Oracle Database 19c. DBMS_JOBS already deprecated since 12.2.